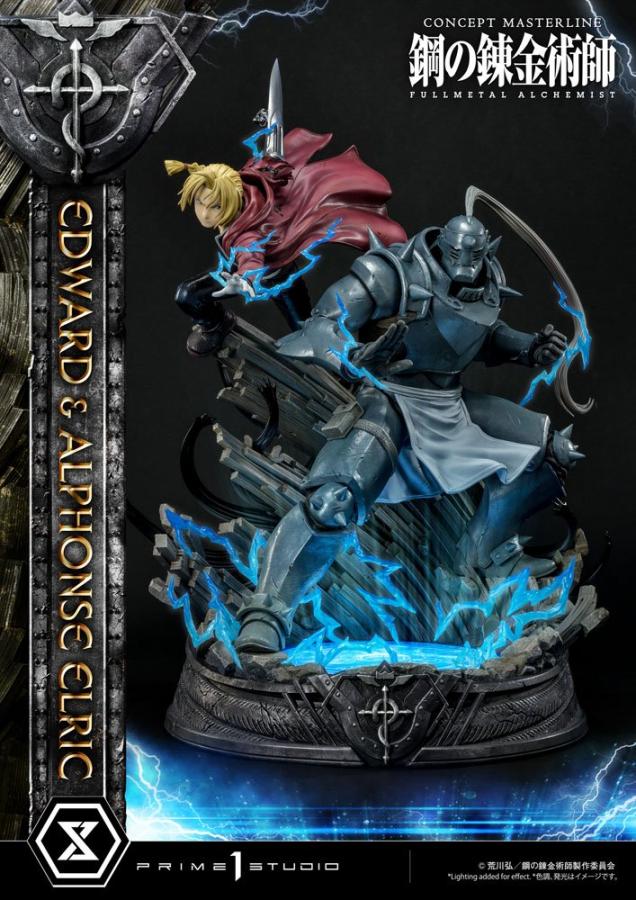 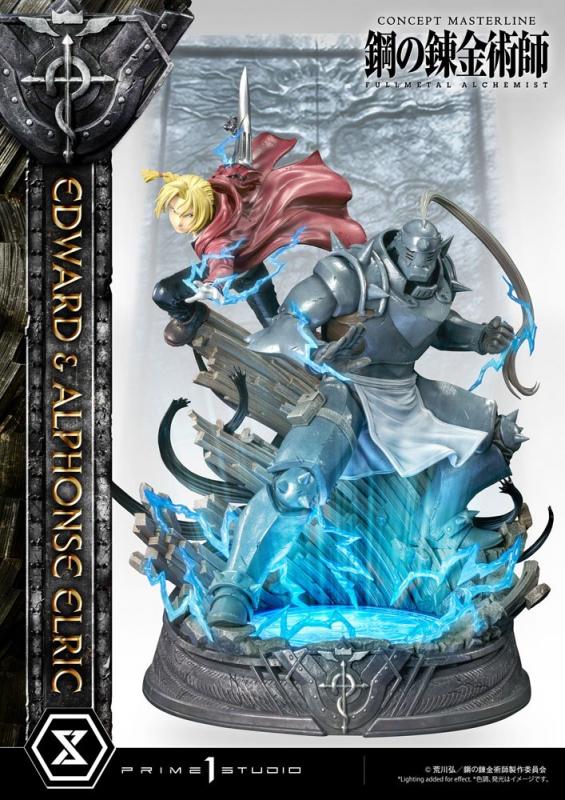 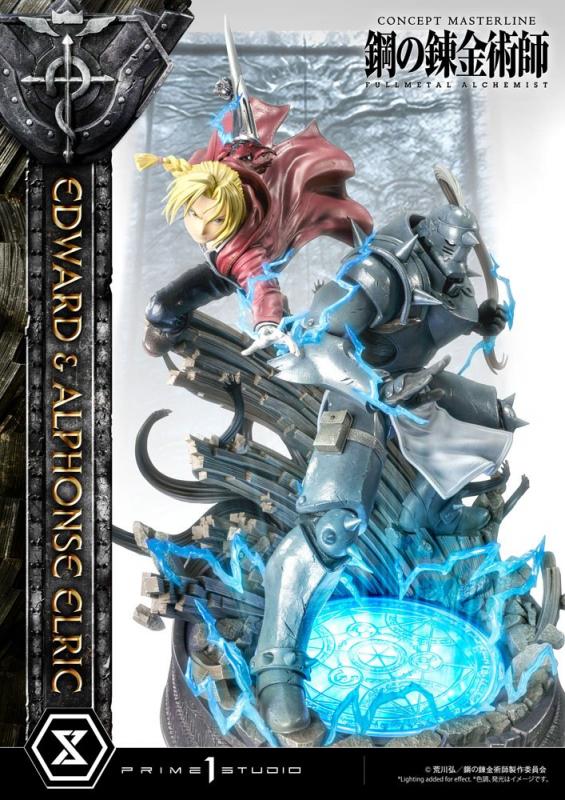 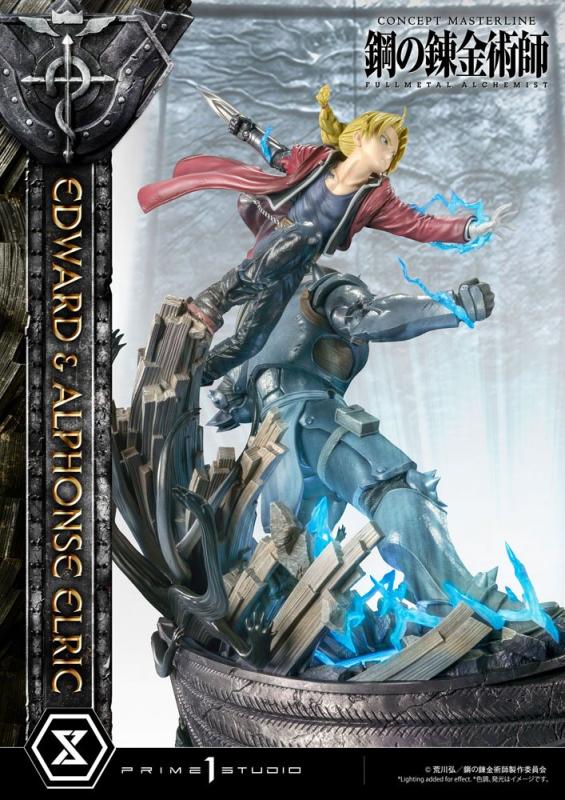 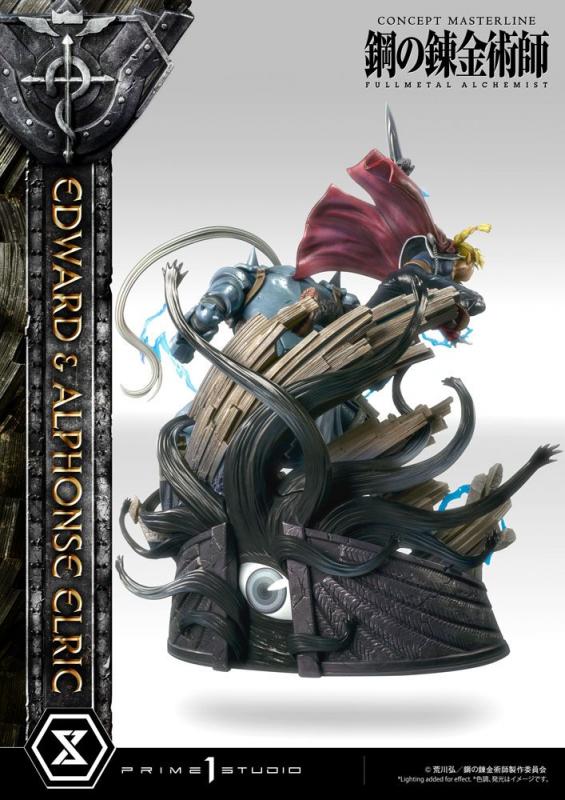 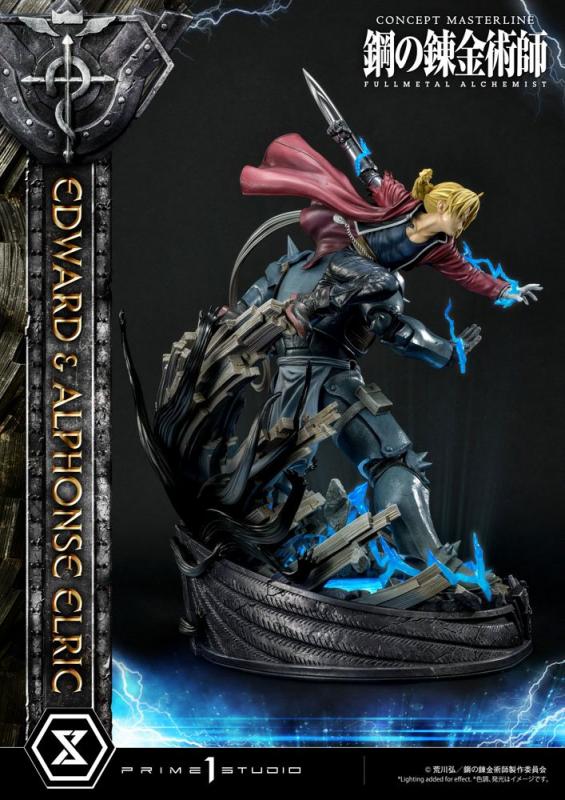 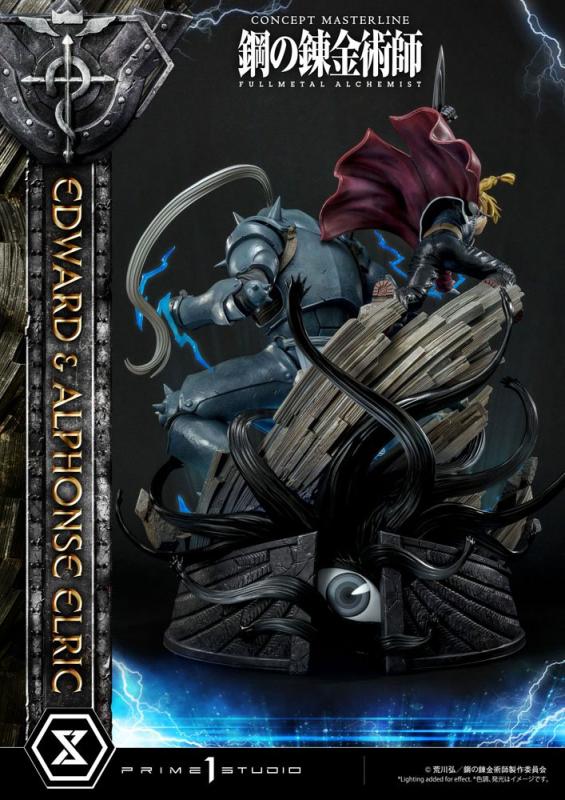 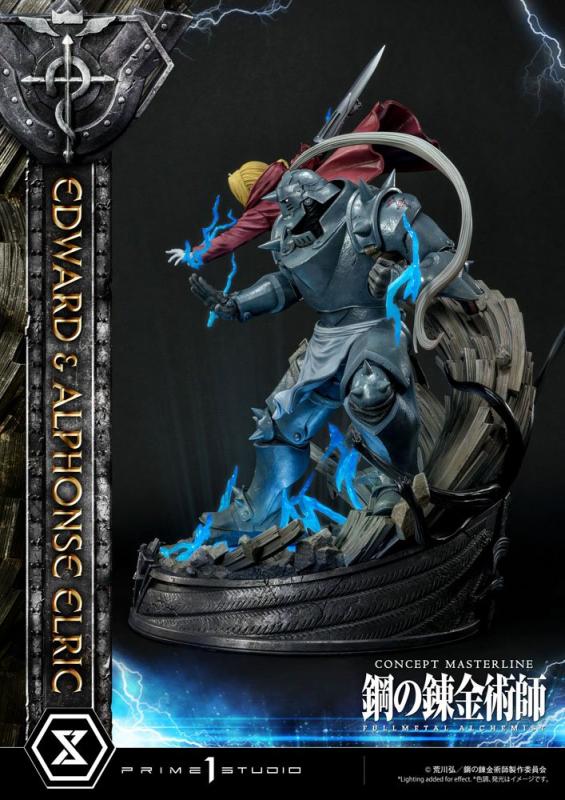 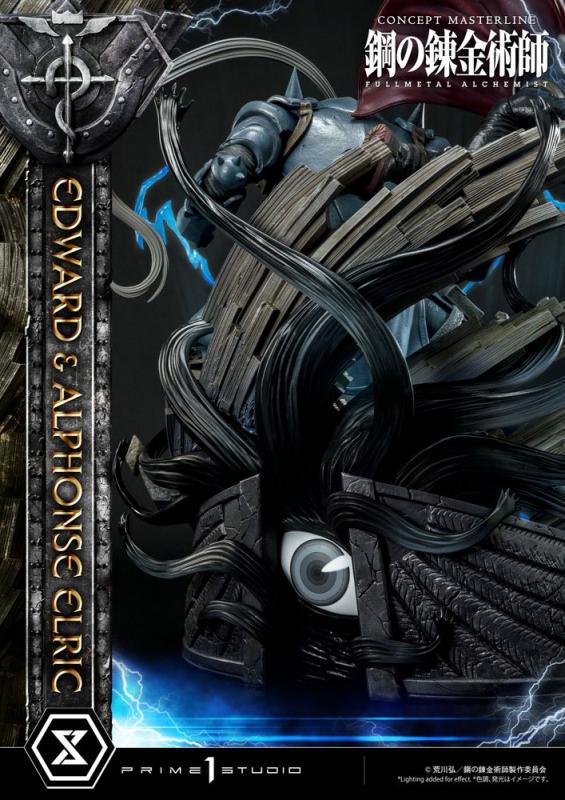 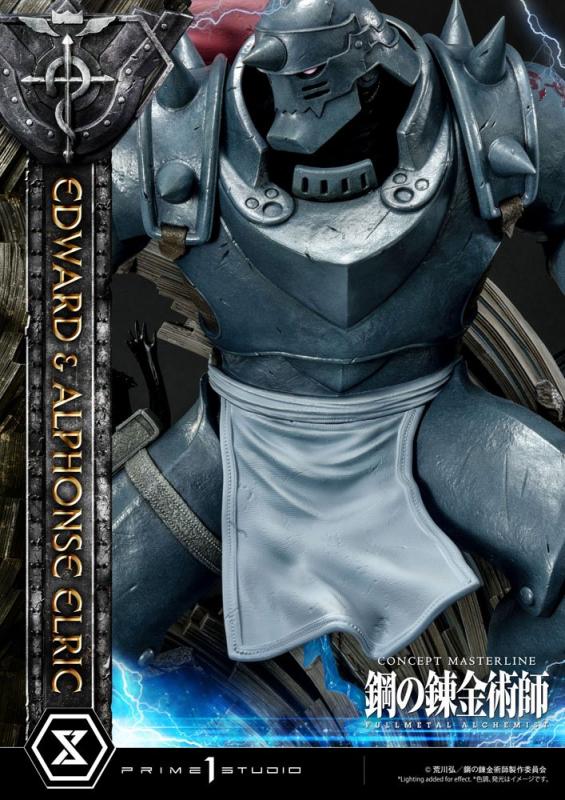 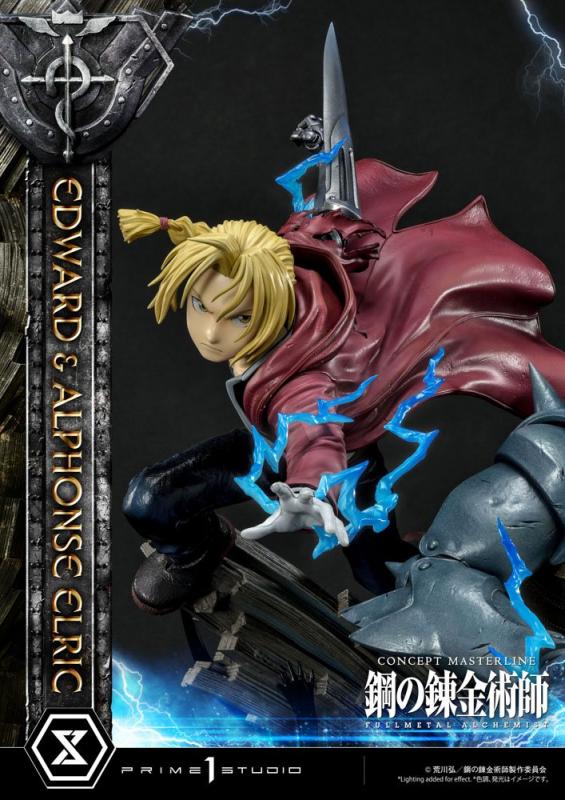 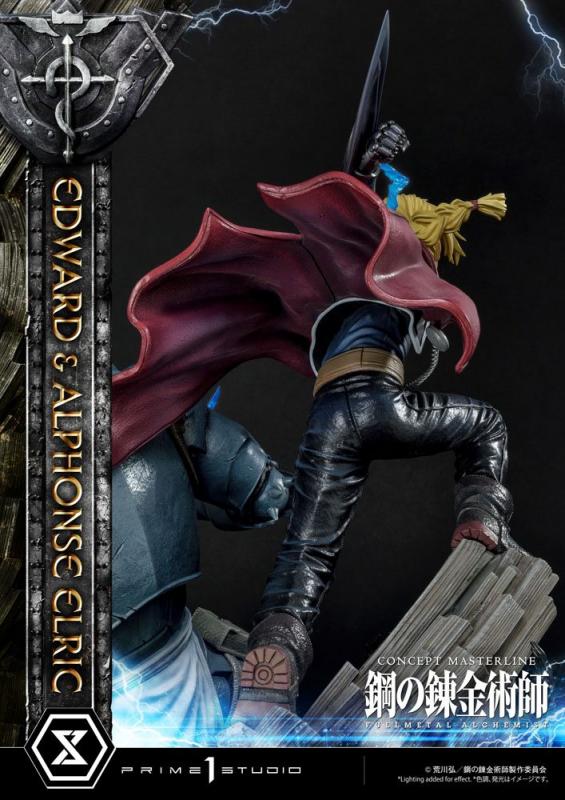 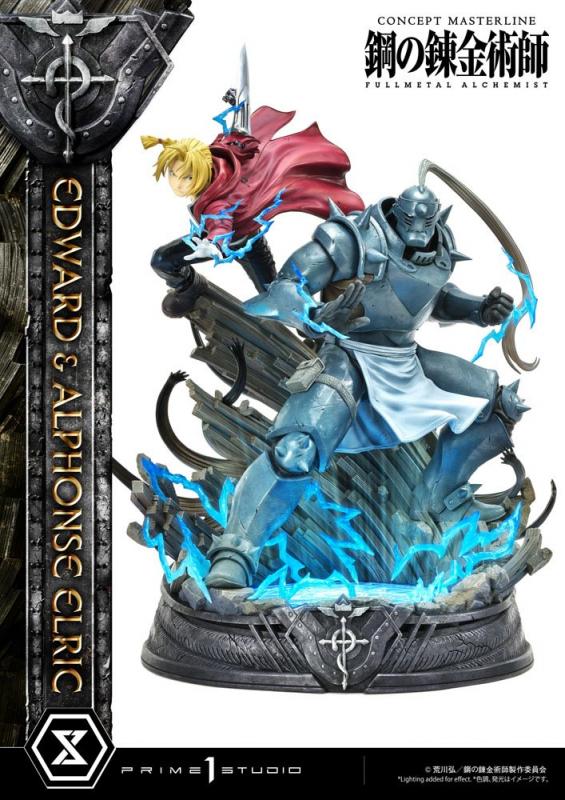 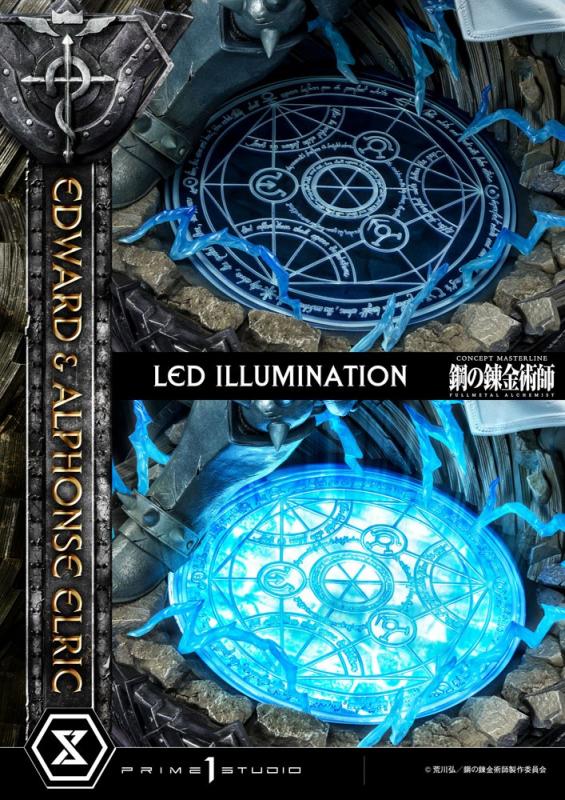 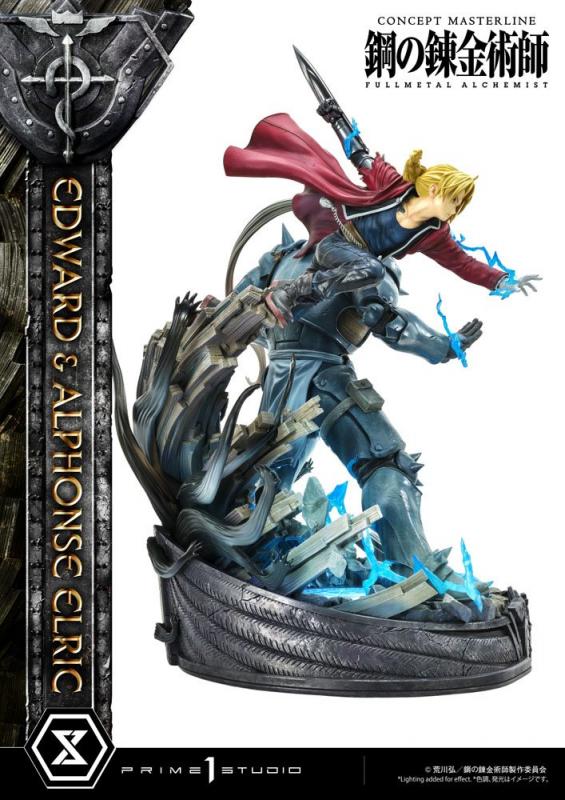 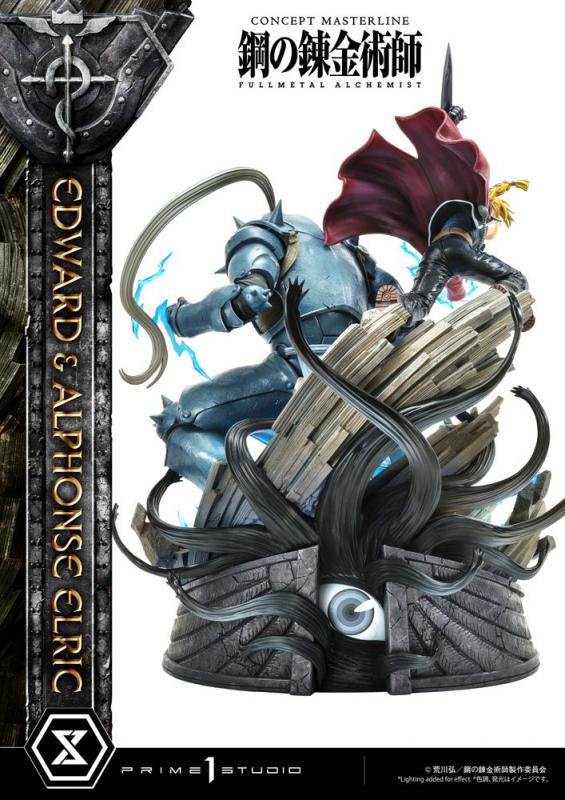 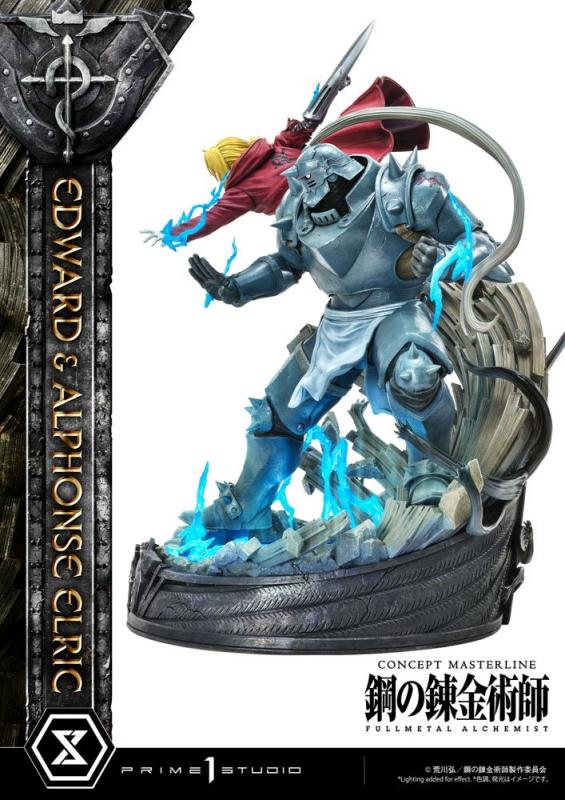 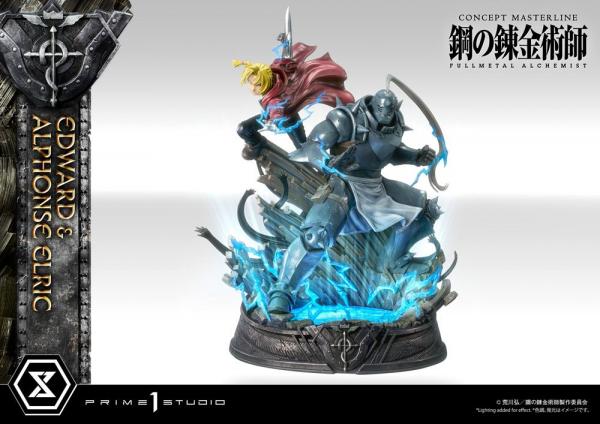 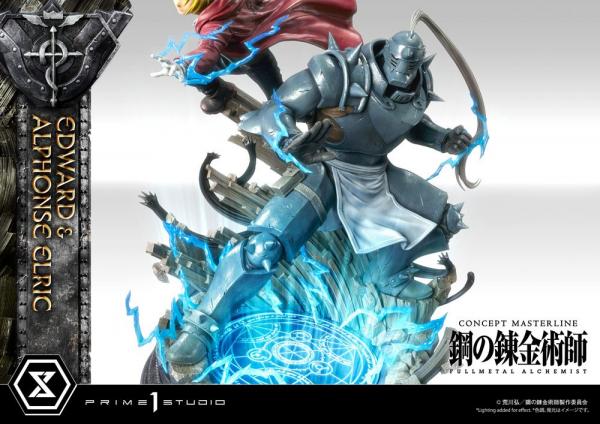 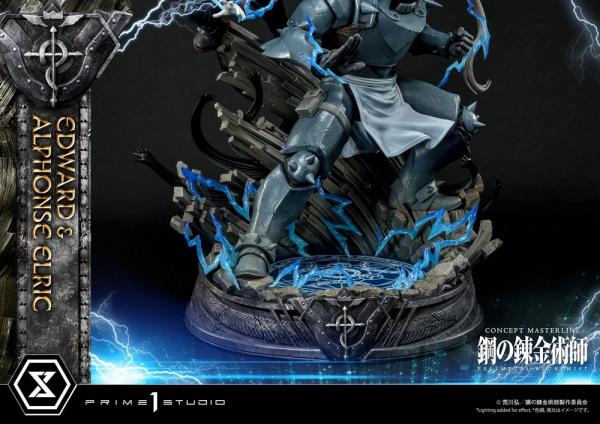 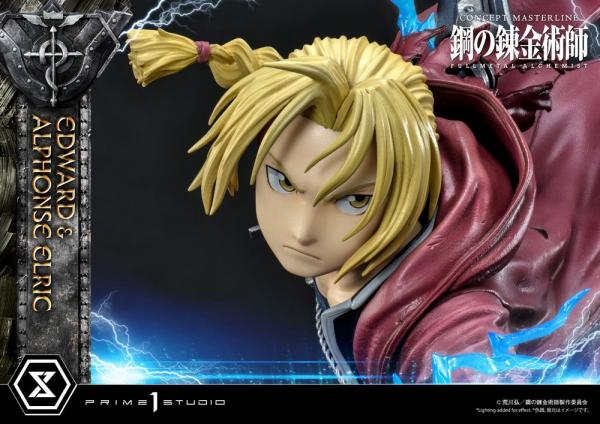 "Humankind cannot gain anything without first giving something in return. To obtain, something of equal value must be lost." - The Law of Equivalent Exchange

Prime 1 Studio is excited to present a dynamic addition to the Concept Masterline Series: The 1/6 Scale Edward and Alphonse Elric from Fullmetal Alchemist!

Set in the country of Amestris, Fullmetal Alchemist is the heartfelt and entertaining story of brothers Edward and Alphonse Elric and their quest for the Philosopher's Stone, in order to use it to bring back what they have lost. In this jawdropping statue measuring at 22 inches tall, Ed and Al display their proficiency in both Alchemy and Martial Arts, both learned from their equally enigmatic teacher, Izumi Curtis.

Our talented artists have posed State Alchemist, Ed Elric, bristling with alchemical energy, flying through the air on top of transmuted flooring; while Al, imposingly impressive in his defensive stance, stands ready above a transmutation circle crackling with otherworldly magic. We have highlighted Ed's agility and power in the flowing design of his coat, posture and movement of his State Alchemist pocketwatch. Ed looks as if plucked right out of the anime in his determined face and with his constructed Automail arm, which sports his go-to melee weapon, an Automail Blade! Al Elric, frequently mistaken as the Fullmetal Achemist because of his full suit of armor, is an accomplished martial artist himself, and shows off his skills in his perfect stance. We have made sure to match the exact tone and color of the paints used in his metallic armor to remain faithful to the anime.

Edward and Alphonse may be in statue form, but that does not take away from the energy of their dynamic pose as they are situated on top of an equally amazing base! We have equipped this transmutation circle base with LED-Illumination to emphasize the incredible alchemical energy that the brothers have at their disposal. The transmutation energy bristling around Ed and Al can be removed or added back for effect. Trasmuted flooring surrounds Ed and Al, and intertwined in them are the dark, shadowy hands that emanate from Truth, who is patiently waiting her due in the back of the base.

As you may have seen in Next Level Showcase 2, we at Prime 1 Studio have redesigned this Fullmetal Alchemist concept from top to bottom to deliver only the very best for you, the fans. Any hot-blooded fan of Fullmetal Alchemist will want to pre-order this amazing diorama without hesitation! Make it yours today! 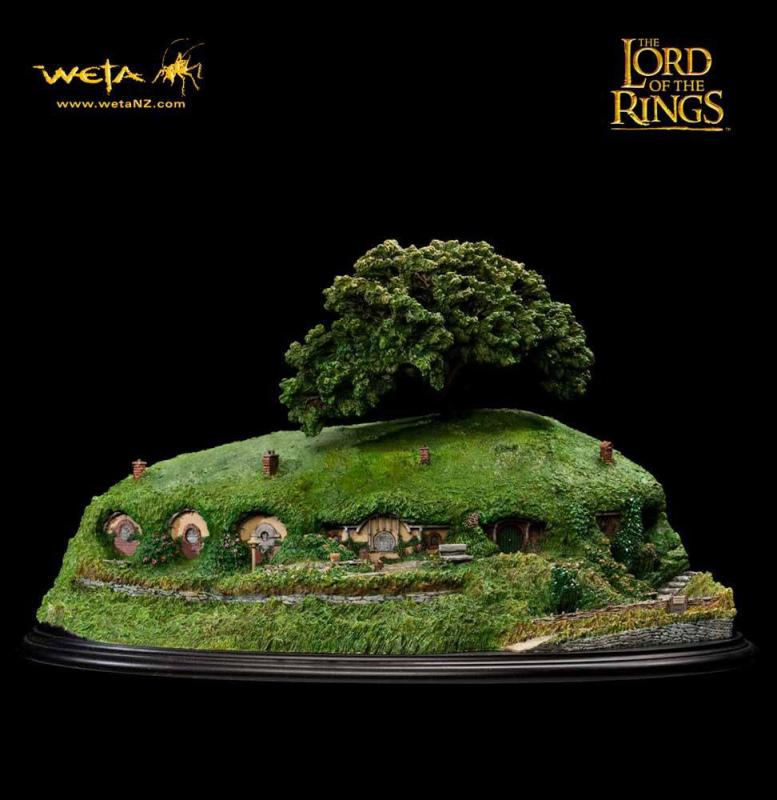 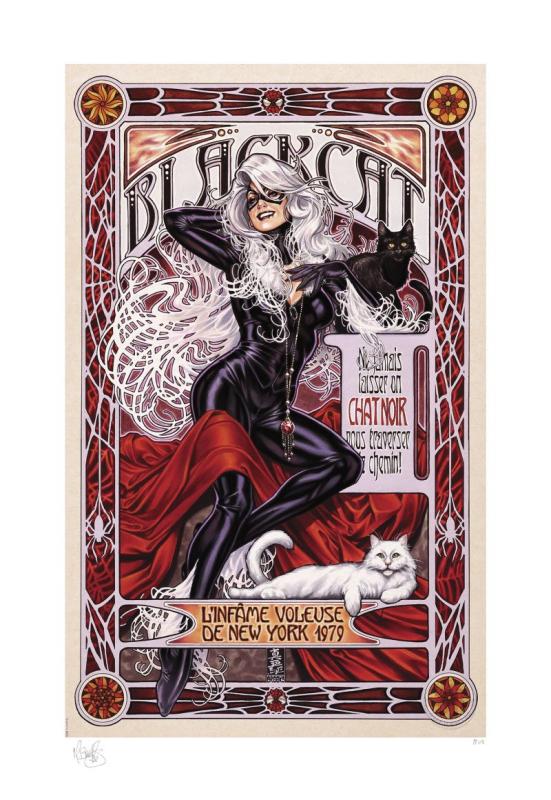 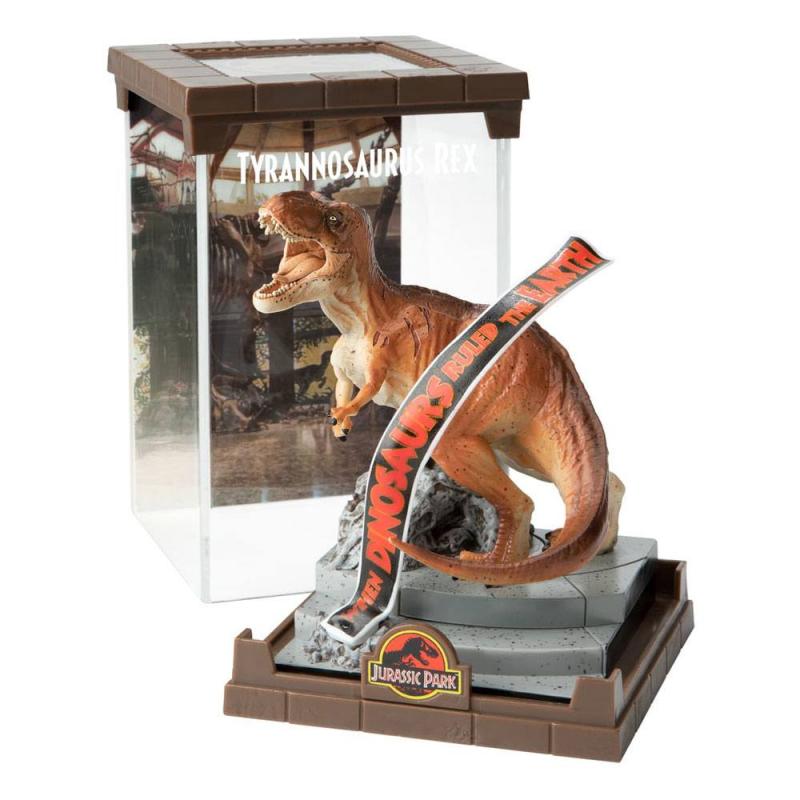 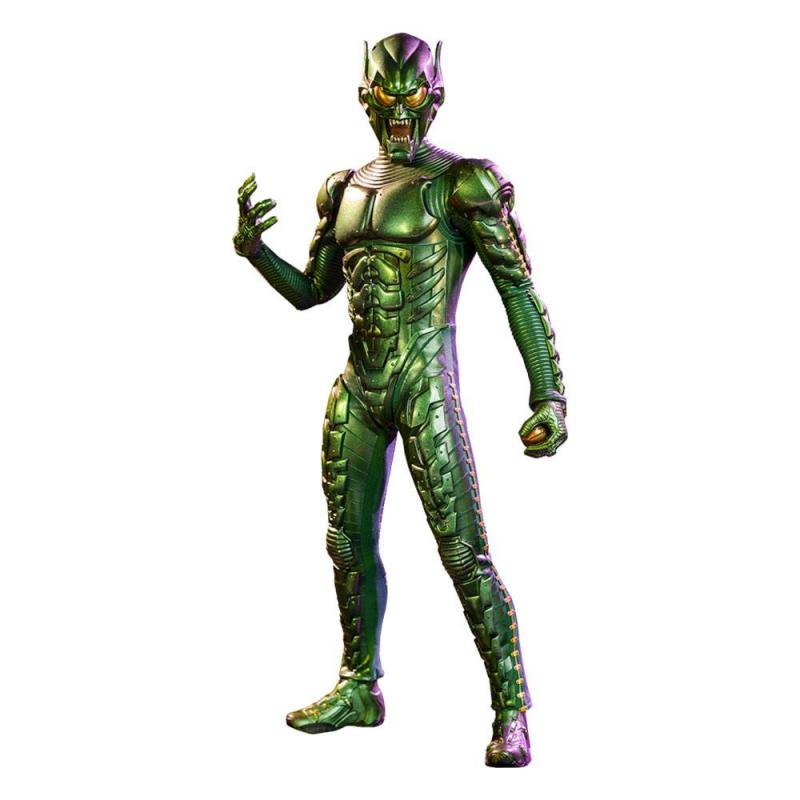 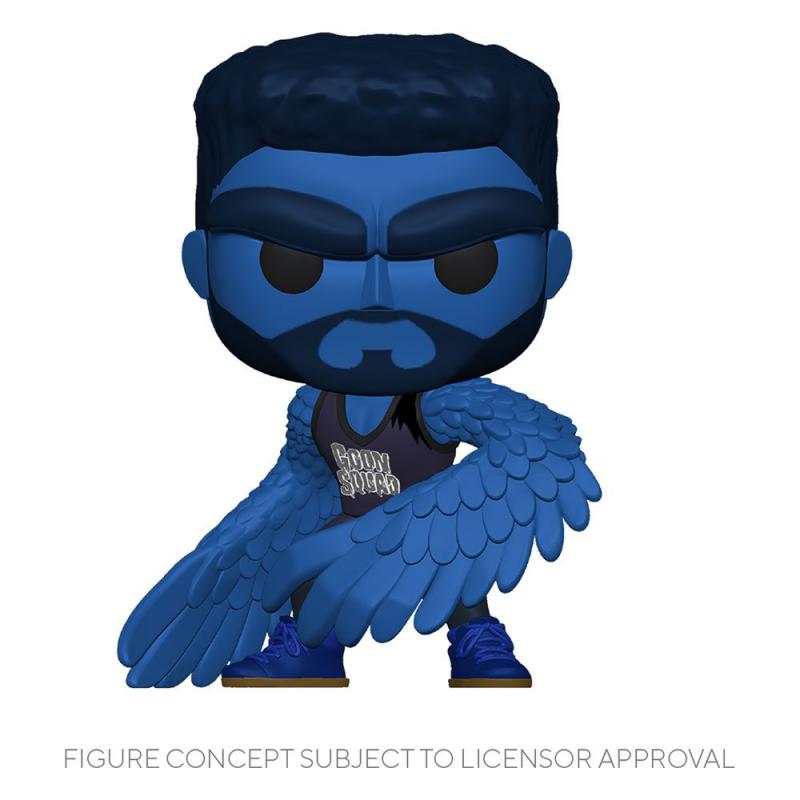 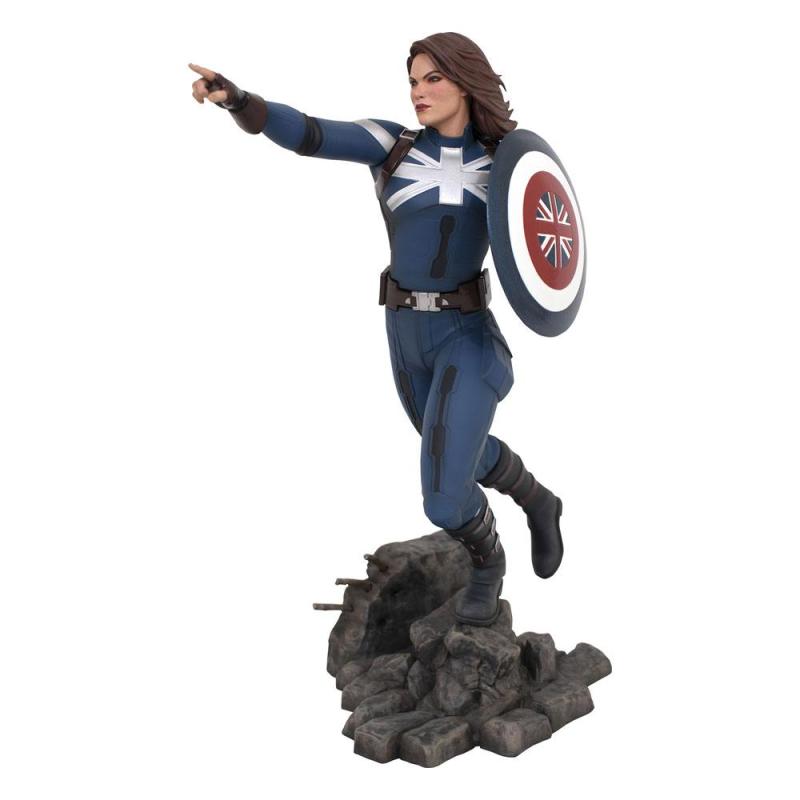