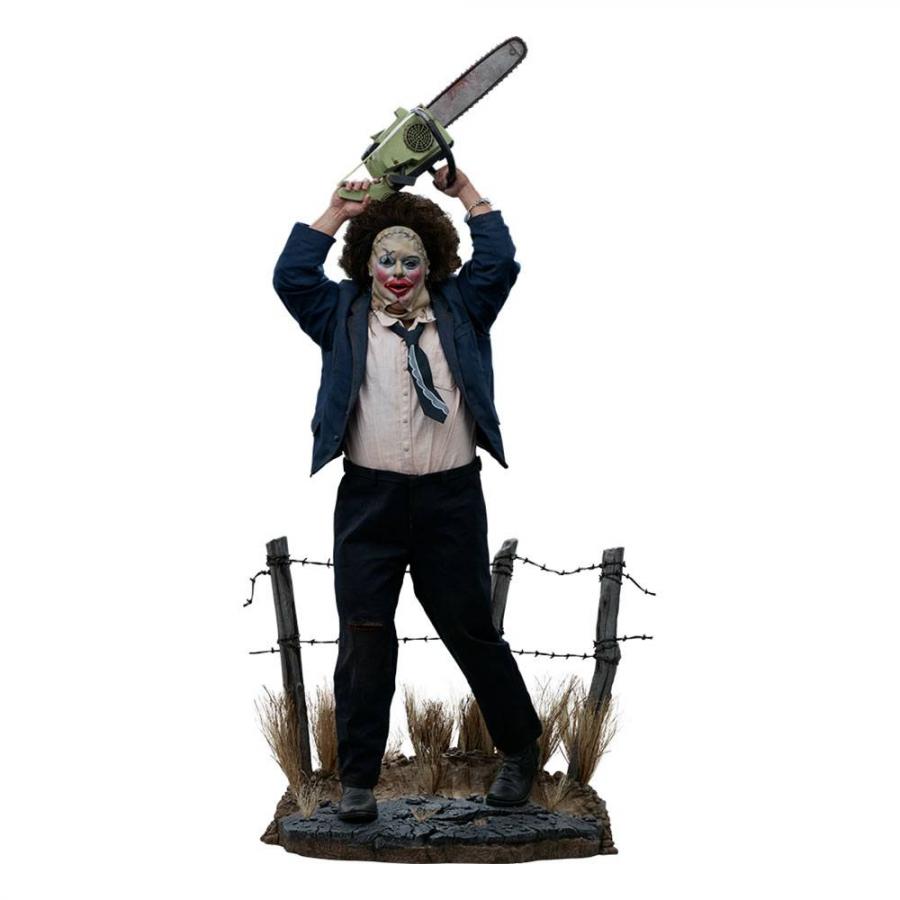 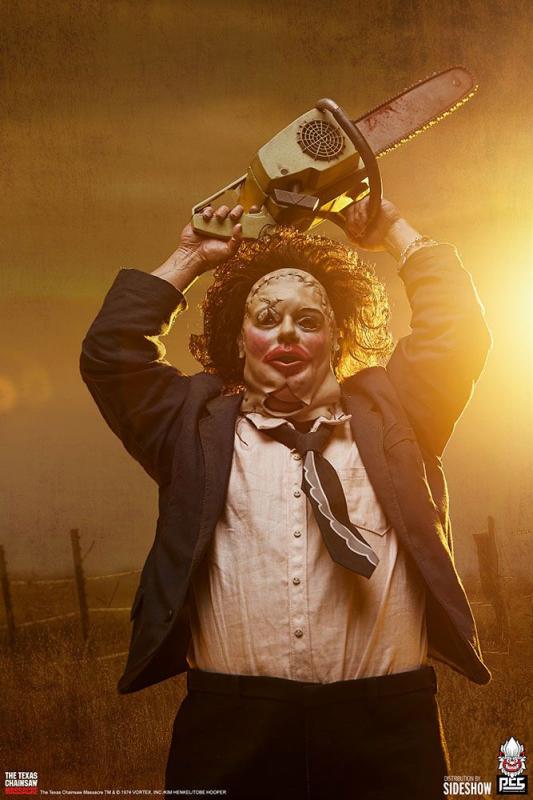 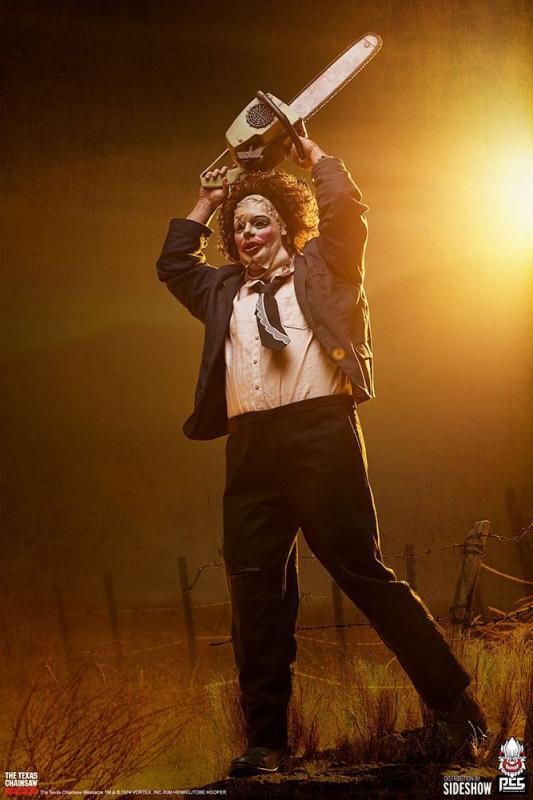 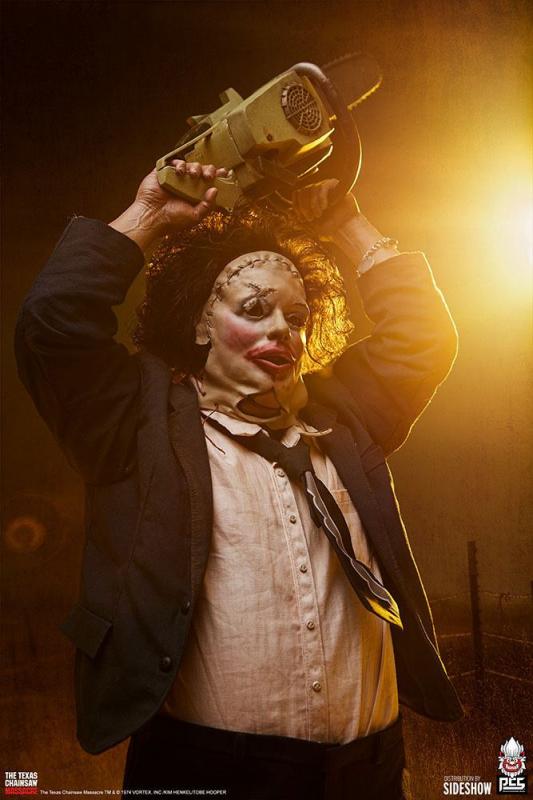 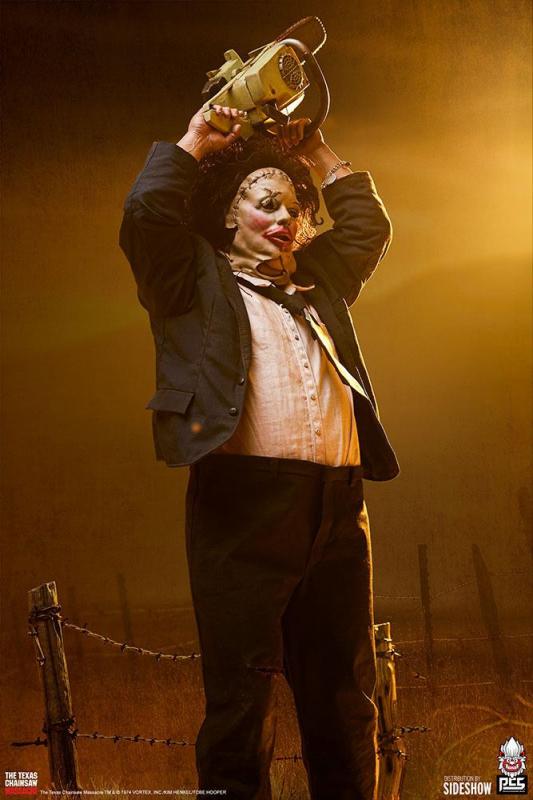 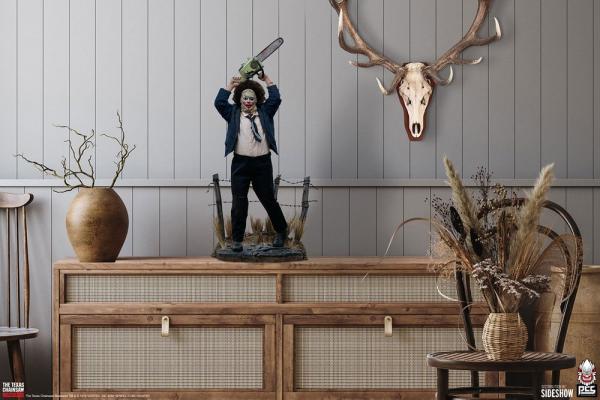 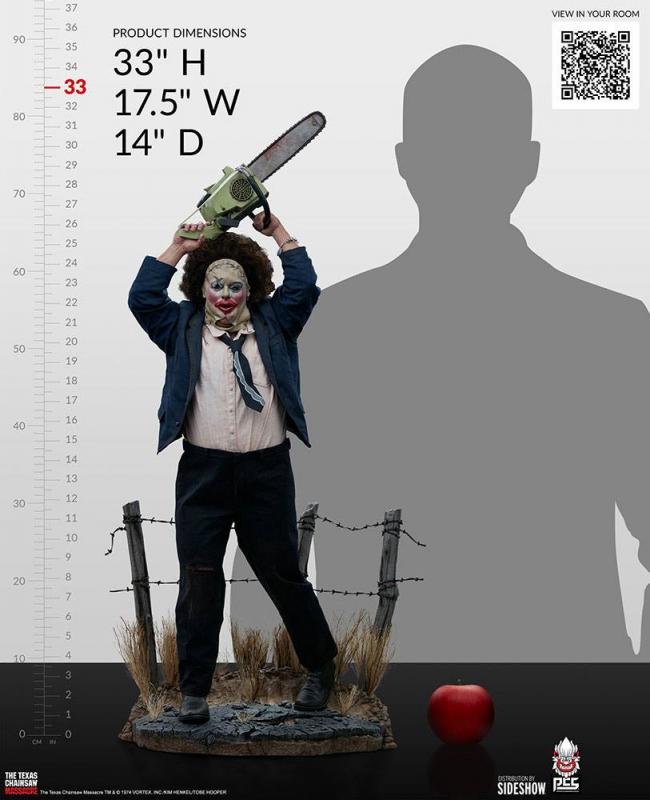 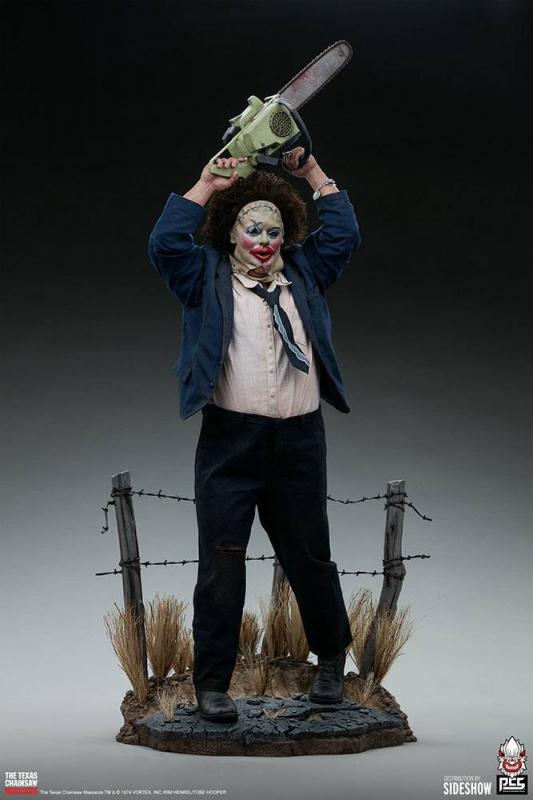 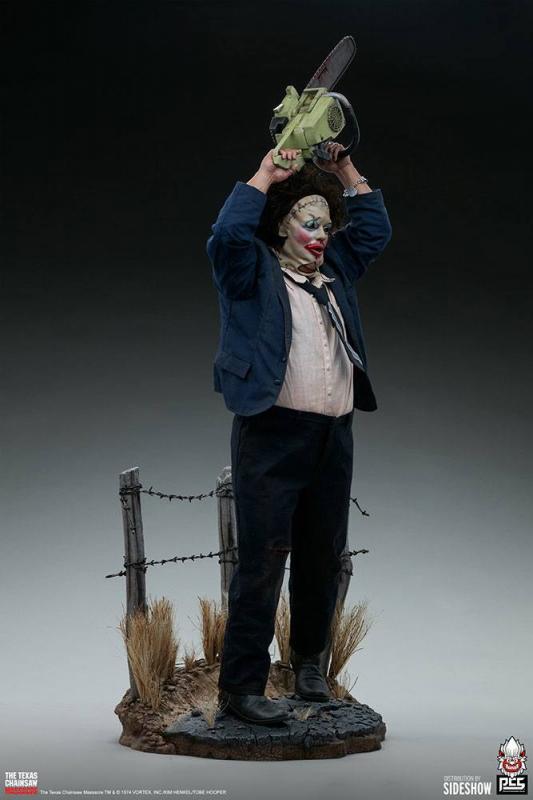 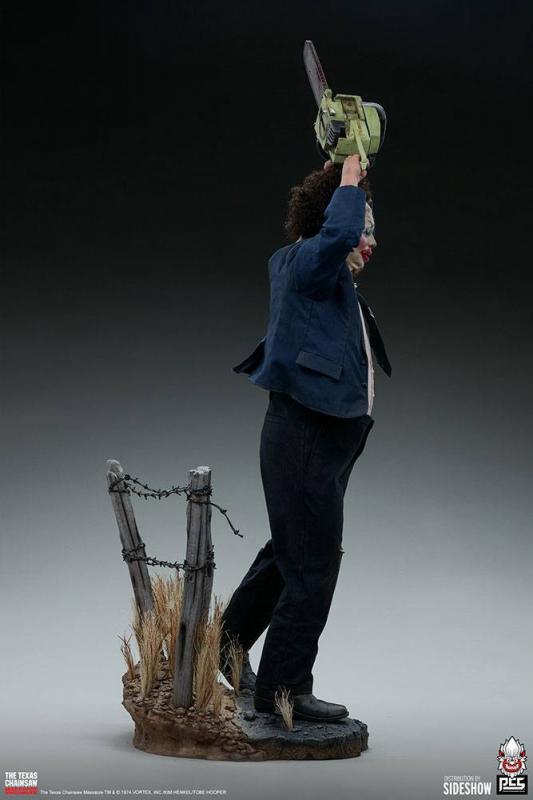 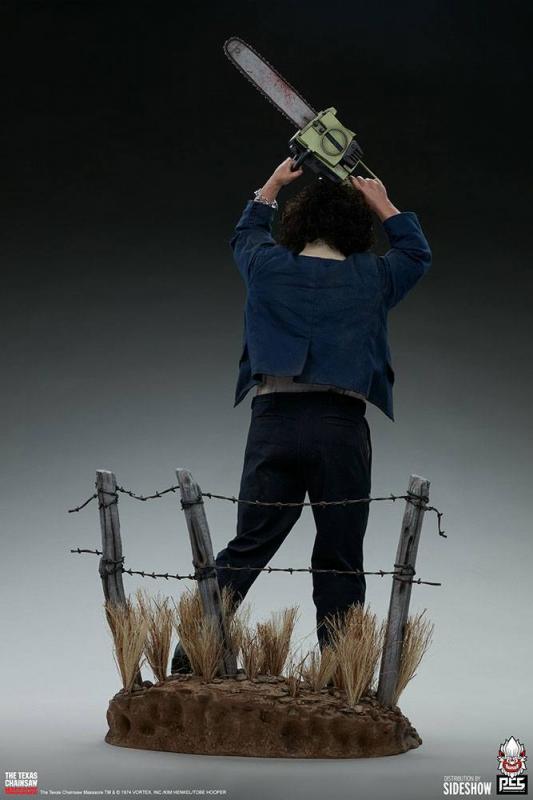 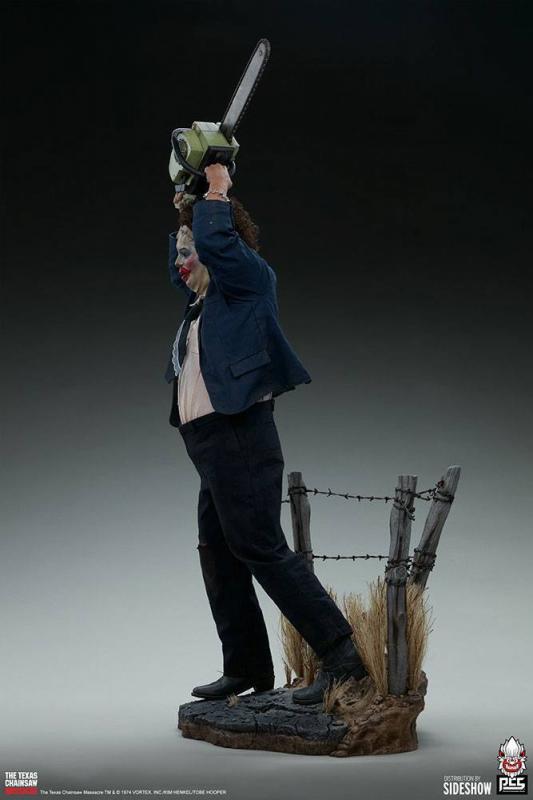 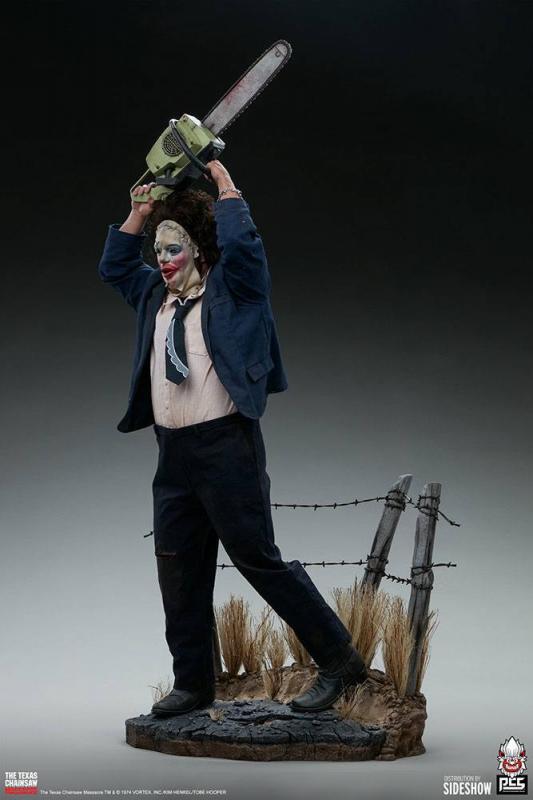 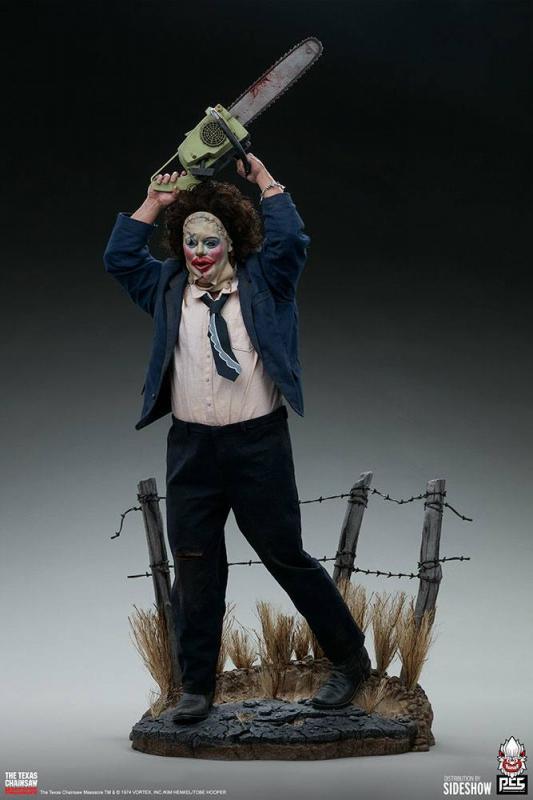 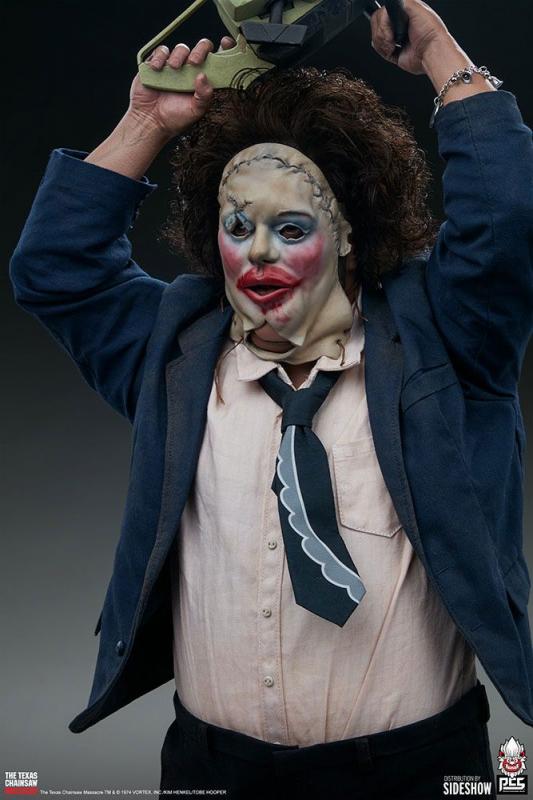 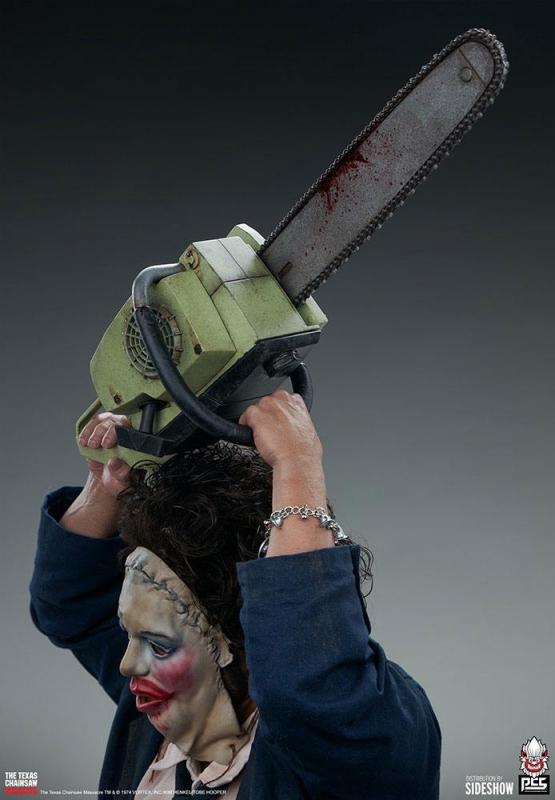 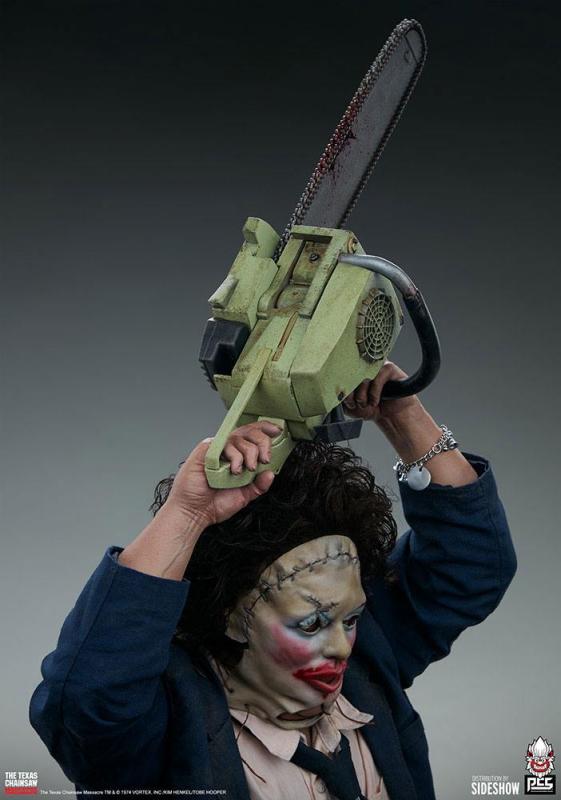 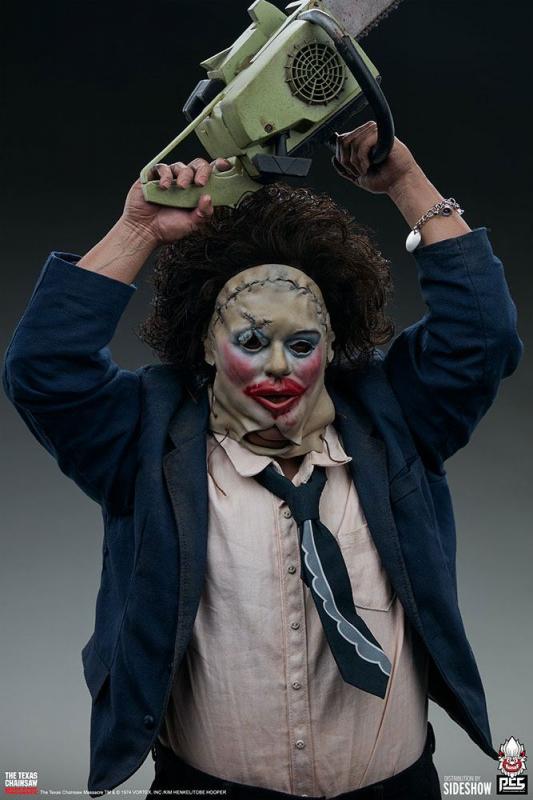 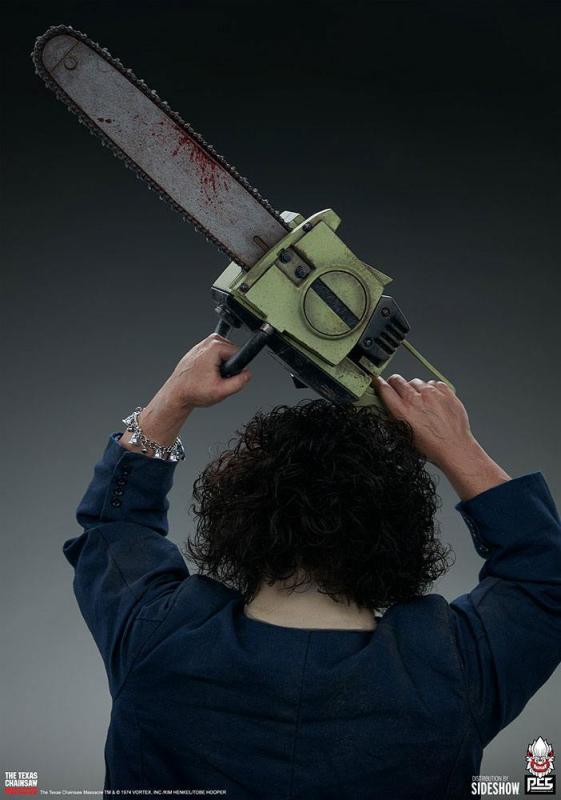 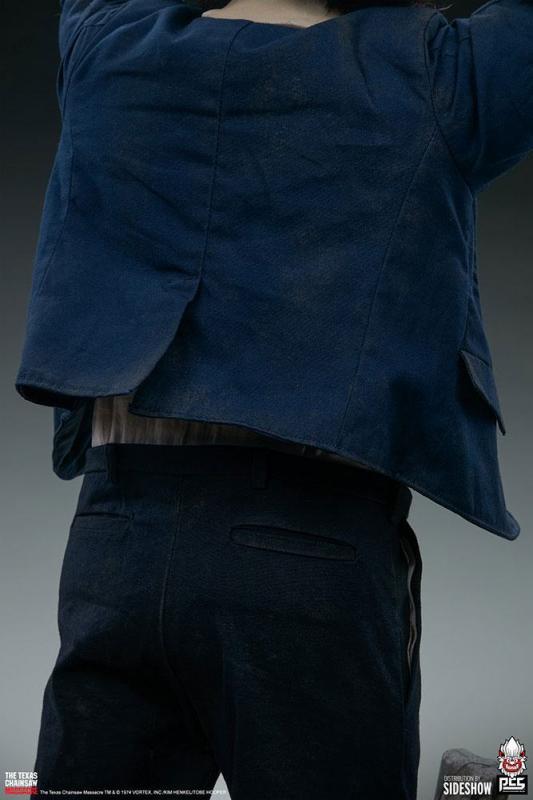 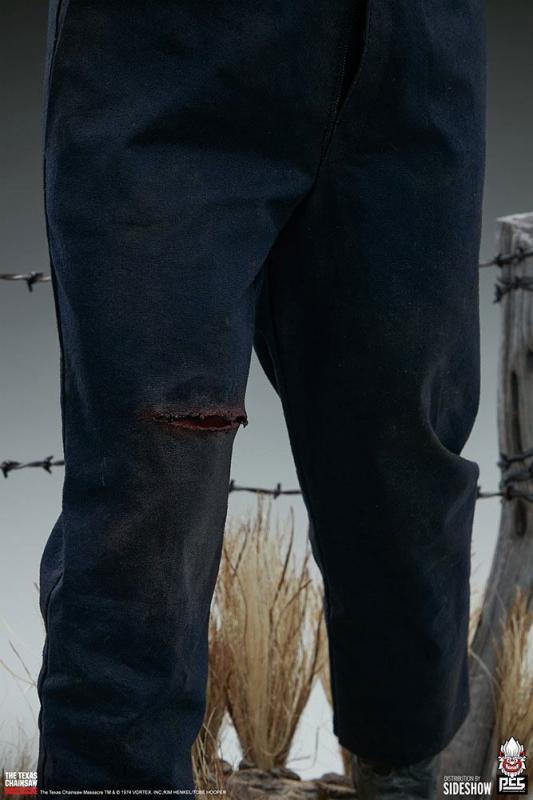 "You don't want to go fooling around other folks' property. Some folks don't like it, they don't mind showing you."

Sideshow and Premium Collectibles Studio present the Leatherface: Pretty Woman Mask 1:3 Scale Statue, a horror collectible who is just dying to meat you.

Inspired by the pulse-pounding finale of the film The Texas Chainsaw Massacre (1974), the Leatherface: Pretty Woman Mask Statue captures the acquired tastes and terrifying strength of this killer cannibal. The statue measures 33" tall and 17.5" wide as Leatherface revs his chainsaw above his head in a bloodthirsty frenzy, standing on the Texas roadside as the sun drops over the horizon. Rickety posts and dried grasses set the iconic scene of a harsh and unforgiving highway as his prey escapes the reach of his weapon - just barely.

The Leatherface: Pretty Woman Mask Statue features a mixed media costume application, tailored from head to toe to recreate Bubba's frightening fine-dining style. He wears a light pink collared shirt, black pants, a black necktie, and a navy suit jacket. The jacket and tie have wire in the seams for posing the fabric, allowing you to craft more dramatic, dynamic movement in this iconic, frantic ending scene. Leatherface's distinct portrait also features a material rope element and soft synthetic hair, adding a terrifying touch of realism to the sculpted skin mask over his head. Additional costuming details like the open fly, exposed cut on his right leg, and the charm bracelet on his left wrist help to complete this meticulous recreation.

The Sawyers would love to have you for dinner sometime, so serve up some more horror in your collection with the Leatherface: Pretty Woman Mask 1:3 Scale Statue by PCS today! 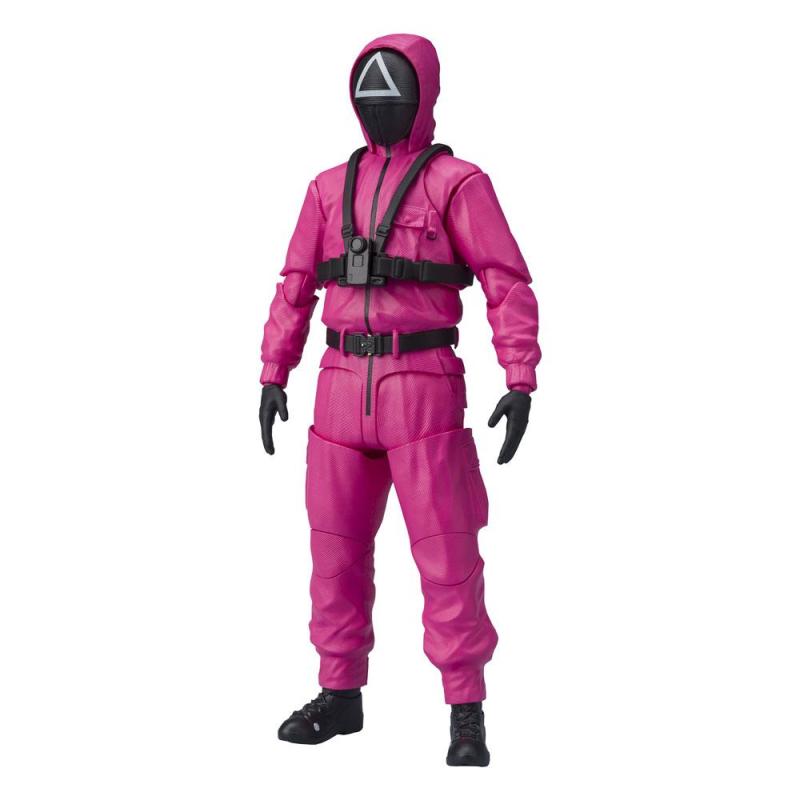 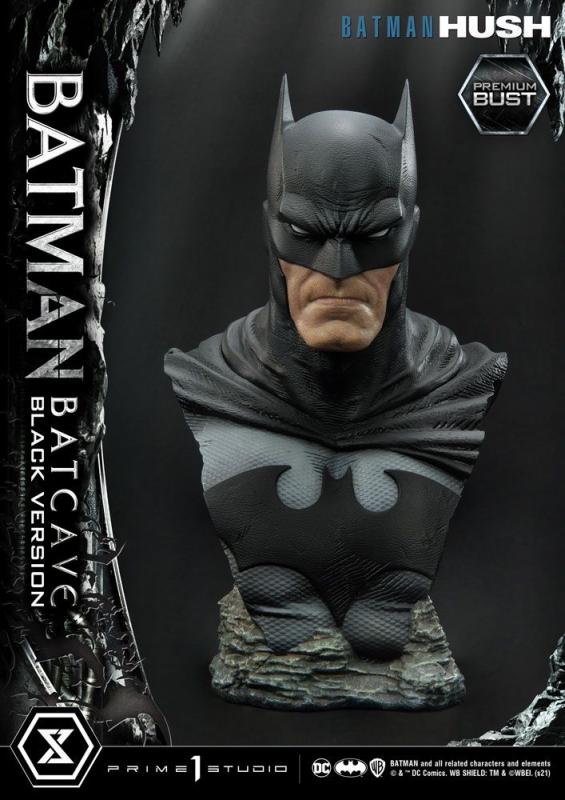 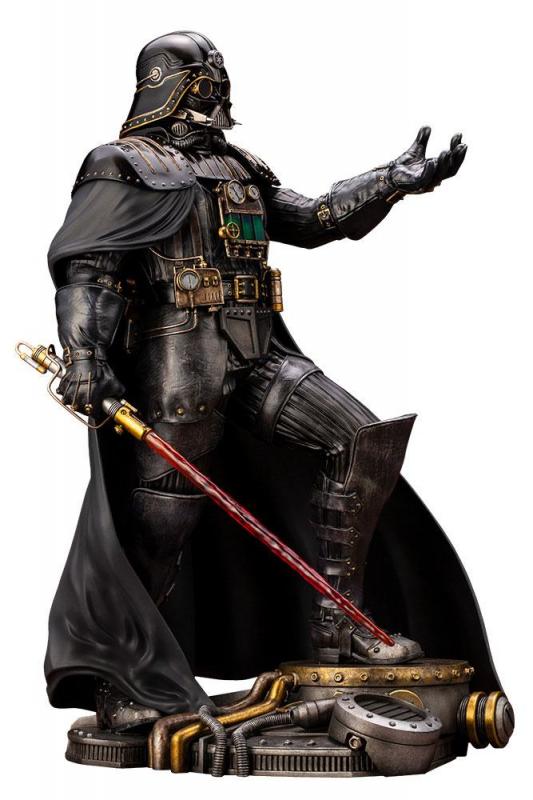 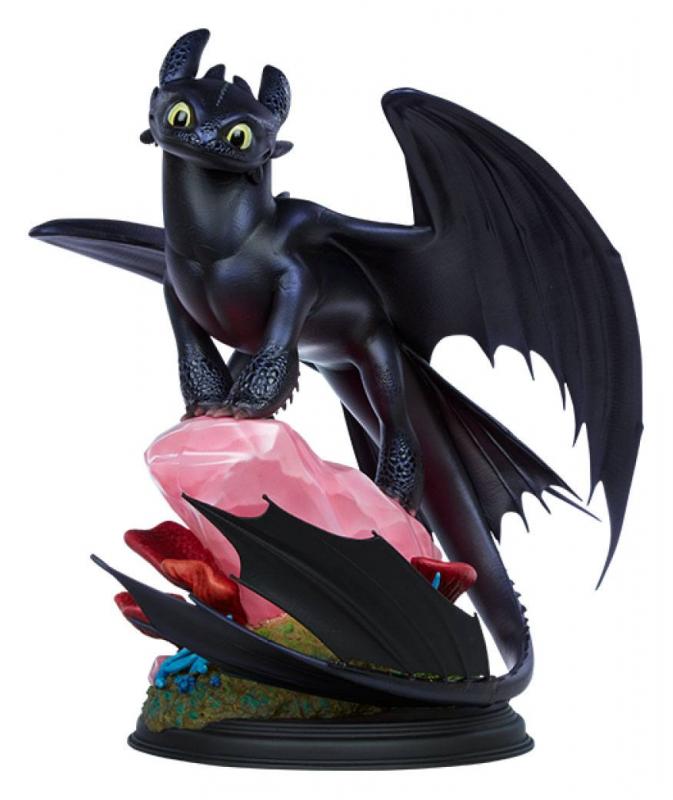 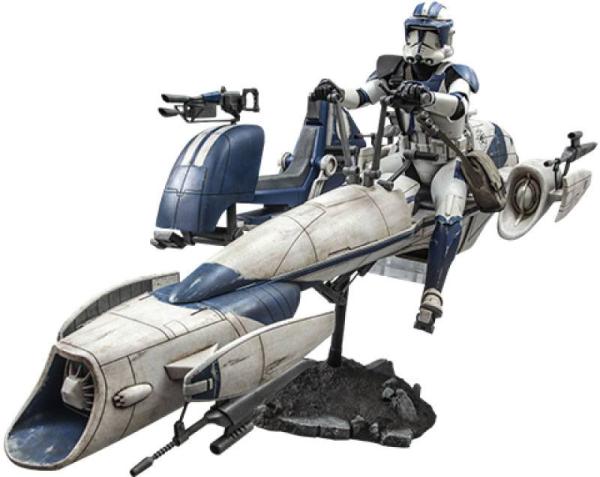 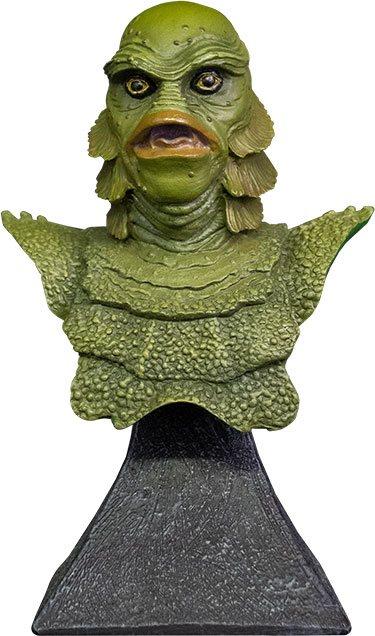